Small-scale farmers in developing countries produce one-third of the world’s food, yet they receive only 1.7% of climate finance while dealing with droughts, floods, cyclones, and other disasters.

On Saturday, dozens of pavilions and conference rooms in Sharm el-Sheikh echoed with this sentiment as COP27 focused on the critical issues of adaptation, agriculture, and food systems in the context of climate change.

“We must assist rural populations in developing resilience to extreme weather events and adapting to a changing climate.” Otherwise, we will simply move from one crisis to the next. “In difficult conditions, small-scale farmers work hard to grow food for us,” Sabrina Dhowre Elba, Goodwill Ambassador for the UN International Fund for Agricultural Development (IFAD), said during a press conference.

Ms. Dhowre Elba, a Somali woman, said this was a personal issue for her: as COP27 began, her country had experienced four consecutive failed rainy seasons, a climatic event not seen in 40 years.

“I can’t stand by while mothers, families, and farmers suffer across the Horn of Africa as it suffers from its worst drought in recent memory,” she explained, urging developed countries to mobilize political will and investment.

“Millions of dollars have been allocated to combat the COVID-19 pandemic and its economic consequences.” Climate change requires the same. The same is required for long-term agricultural support. It’s critical to our collective well-being and food security,” she added.

Funds for adaptation must be delivered

According to Dina Saleh, Regional Director of IFAD, failure to assist rural populations in adapting could have dangerous consequences, including prolonged poverty, migration, and conflict.

“This is why, today, we are calling on world leaders from developed countries to honor their pledge to provide $100 billion per year in climate finance to developing countries, with half of that amount dedicated to climate adaptation,” she said.

Thirteen years ago, at COP15 in Copenhagen, developed countries made a significant commitment. They promised to channel $100 billion per year to less-developed countries by 2020 to assist them in adapting to climate change and mitigating further temperature rises. However, that promise was not kept.

Ms. Saleh warned that there is a “narrow window” to assist rural poor people in surviving and protecting their communities, and that crop yields could fall by up to 50% by the end of the century.

“The choice is to adapt or starve,” she warned, urging COP27 to be about action, credibility, and justice for the invisible and silent.

To address these concerns, the Egyptian Presidency of the COP27 launched the new initiative Food and Agriculture for Sustainable Transformation, or FAST, on Friday, with the goal of increasing the quantity and quality of climate finance contributions to transform agriculture and food systems by 2030.

The cooperation program will include concrete deliverables that will assist countries in gaining access to climate finance and investment, increasing knowledge, and providing policy support and dialogue.

The UN Food and Agriculture Organization (FAO), in collaboration with other UN agencies, will facilitate this initiative, which, according to Zitouni Ould-Dada, Deputy Director of the FAO’s Climate and Environment Division, places agriculture at the center of efforts to combat climate change.

“Recognize that agriculture must be an integral part of the solution to the climate crisis,” he told UN News.

The importance of investing in innovation

At the same time, while the agricultural and food sector is severely impacted by climate change, it also contributes roughly one-third of global greenhouse emissions, from production to consumption, Mr. Ould-Dada explains, adding that agri-food systems must be transformed.

“We cannot continue with the current model of producing food while degrading the soil, decreasing biodiversity, and negatively impacting the environment.” No. “It has to be sustainable,” he says.

Agriculture, according to the expert, can be an important part of the solution to the climate crisis by sequestering carbon in soil and plants and promoting adaptation and resilience if the right choices are made.

“With the current model and the threat of climate change, we cannot produce enough food to feed and nourish a growing population.” We simply cannot.”

The first issue the world should address, he believes, is food waste, which accounts for 8% of global gas emissions.

“Every day, approximately 828 million people go hungry.” Despite this, we waste one-third of the food we produce for human consumption. “We must change our mindset and production model so that we do not lose and waste food,” he emphasizes.

In terms of solutions, he adds that harnessing the power of innovation is critical for reducing emissions, assisting agriculture in adapting to a changing climate, and making it more resilient to adversity caused not only by climate change, but also by pandemics or war, such as the current situation in Ukraine.

“Innovation in a broader sense, such as precision farming with drip irrigation combined with renewable energy for efficiency.” But, as Mr. Ould-Dada pointed out, “innovation that harnesses traditional knowledge of smallholder farmers is also important because it happens all the time.”

UN representatives were not the only ones emphasizing the importance of countries investing in transformation and meeting their climate finance commitments.

A massive protest led by a coalition of environmental, women’s, indigenous, youth, and labor organizations took over the roads and pathways connecting the COP27 pavilions.

“All negotiation texts must include rights to territories, rights to resources, human rights, indigenous peoples’ rights, and loss and damage.” “1.5 is not negotiable; that is what we are here to stand for,” said Chadian environmentalist and SDG advocate Hindou Oumarou Ibrahim.

According to the activist, her people are dying as a result of floods and droughts, while some indigenous communities in the Pacific are losing their lands.

“What we want is justice.” Justice for our people, as well as for our economies’ losses and damages. “We are losing our culture, our identity, and our lives, and these are not reimbursable, but climate finance must be delivered,” she yelled amid hundreds of protesters.

‘This COP is lost and damaged’

Meanwhile, renowned Nigerian activist Nnimmo Basse claimed that the COP27 was “lost and damaged” because major polluters were allowed to participate.

“Africa is under attack right now. Mining and oil and gas companies are destroying, killing, and stealing their dirty machines across the continent. “This is the kind of colonialism that cannot be tolerated,” he said, shortly before inciting participants to chant “no fossil fuel colonialism.”

According to Mr. Basse, if countries can spend two trillion dollars a year on warfare, destruction, and killing, they can spend it on resilience.

US says it’s ready to support

Later that day, US Special Envoy for Climate Action John Kerry told a press conference that his country is “totally supportive” of the push to address loss and damage, the most difficult issue in the COP27 negotiations so far.

“We have engaged with our friends to work through the proposals,” he added, emphasizing that US President Joe Biden, who NGOs chastised on Friday for failing to mention loss and damage in his COP27 speech, is also in favor of the move.

The negotiation group of the 77 and China, which essentially includes all developing countries, was able to put the issue on the COP agenda for the first time this year.

The plan is to establish a loss and damage financial facility that will provide monetary compensation to the nations most affected by climate change while assuming less responsibility for greenhouse gas emissions. 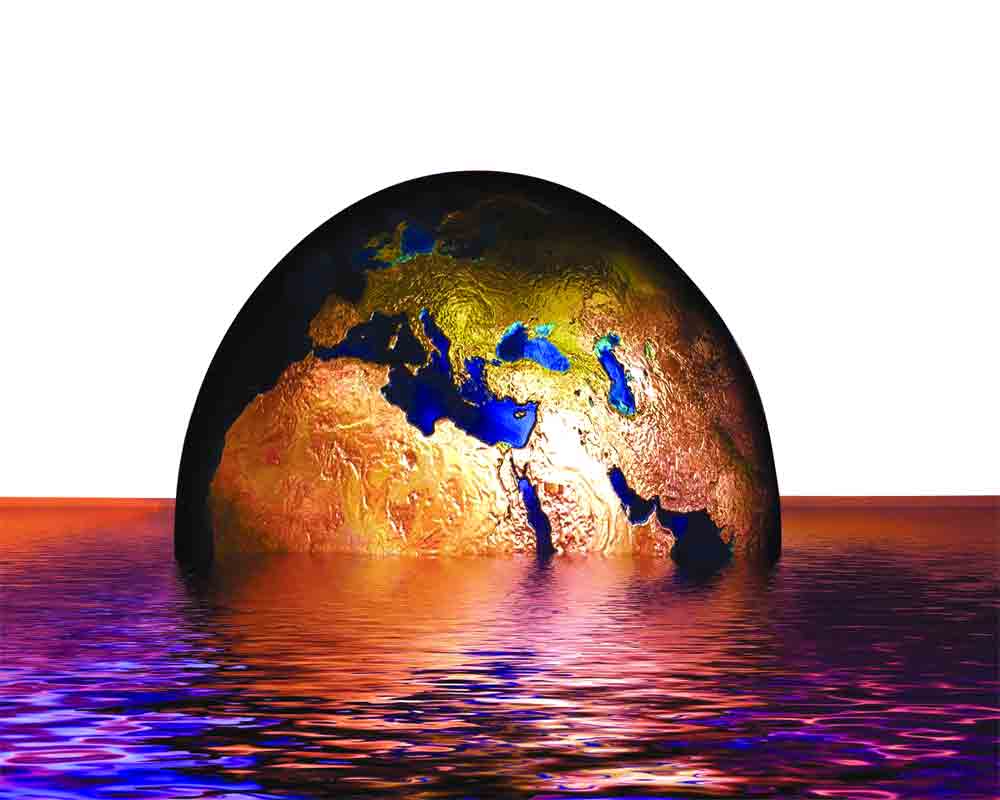 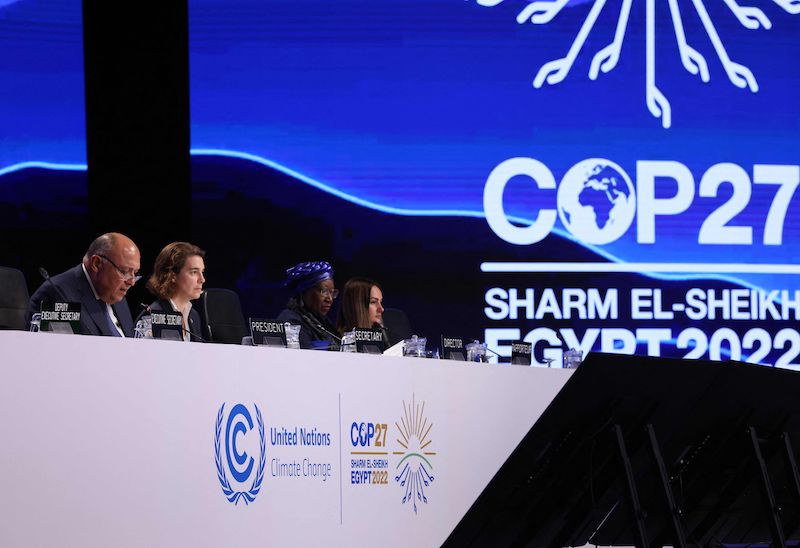 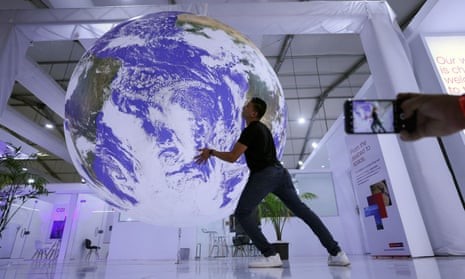